Some members of the CHIME/FRB Collaboration, in front of CHIME in 2019. Courtesy: Andre Renard, Dunlap Institute.

The new catalog significantly expands the current library of known FRBs, and is already yielding clues as to their properties. For instance, the newly discovered bursts appear to fall in two distinct classes: those that repeat, and those that don’t. Scientists identified 18 FRB sources that burst repeatedly, while the rest appear to be one-offs. The repeaters also look different, with each burst lasting slightly longer and emitting more focused radio frequencies than bursts from single, nonrepeating FRBs.

These observations strongly suggest that repeaters and one-offs arise from separate mechanisms and astrophysical sources. With more observations, astronomers hope soon to pin down the extreme origins of these curiously bright signals.

CHIME comprises four massive cylindrical radio antennas, roughly the size and shape of snowboarding half-pipes, located at the Dominion Radio Astrophysical Observatory in British Columbia, Canada. CHIME is a stationary array, with no moving parts. The telescope receives radio signals each day from half of the sky as the Earth rotates.

While most radio astronomy is done by swiveling a large dish to focus light from different parts of the sky, CHIME stares, motionless, at the sky, and focuses incoming signals using a correlator — a powerful digital signaling processor that can work through huge amounts of data, at a rate of about 7 terabits per second, equivalent to a few percent of the world’s internet traffic.

Over the first year of operation, CHIME detected 535 new fast radio bursts. When the scientists mapped their locations, they found the bursts were evenly distributed in space, seeming to arise from any and all parts of the sky. From the FRBs that CHIME was able to detect, the scientists calculated that bright fast radio bursts occur at a rate of about 800 per day across the entire sky — the most precise estimate of FRBs overall rate to date.

For each of the 535 FRBs that CHIME detected, Masui and his colleagues measured its dispersion, and found that most bursts likely originated from far-off sources within distant galaxies. The fact that the bursts were bright enough to be detected by CHIME suggests that they must have been produced by extremely energetic sources. As the telescope detects more FRBs, scientists hope to pin down exactly what kind of exotic phenomena could generate such ultrabright, ultrafast signals. 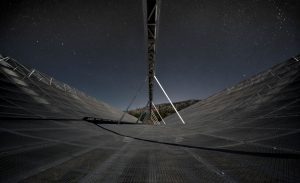 With lots of work ahead, the CHIME/FRB collaboration agrees that this discovery is worth celebrating. Explains CITA Professor Ue-Li Pen: “These wonderful results are the fruits of the persistent efforts from the CHIME and FRB teams over the past 15 years.”