Black holes and neutron stars are the sources of some of the most extreme events observable in the universe. From their birth in the sudden collapse of massive stars and throughout their life, they provide us with a remarkable laboratory to study the laws of physics in conditions otherwise inaccessible to experiments.

Black holes are objects so compact that no information can escape their gravitational pull. They can only be described within Einstein’s theory of general relativity. Astronomers currently observe them through either their gravitational interactions with surrounding stars, or the hot disks of material surrounding them and the high-energy jets that they can power. Astrophysicists at CITA are involved in the study of the supermassive black holes located at the center of many galaxies, including our own Milky Way, and their critical influence on the formation, evolution and structure of galaxies. They also model the disruption of stars and accretion of gas by black holes, to determine what observations can tell us about their properties and environment.

Neutron stars are the mass of the sun within the size of a city and scientists studying them learn about nuclear physics and the properties of high-density matter. Their strong magnetic fields and rapid rotation can power high-energy jets and the emission of radiation across the electromagnetic spectrum. In pulsars, this takes the form of extremely regular pulses of radiation synchronized with the rotation period of the neutron star. These pulses can be used to study the neutron star itself, but also any object between Earth and the pulsar interfering with this regular emission. In magnetars, extreme magnetic fields cause bursts of high-energy radiation observed by gamma-ray and X-ray telescopes. Properly modeling and understanding these systems and their emission is a complex physical problem in which CITA scientists are deeply involved. 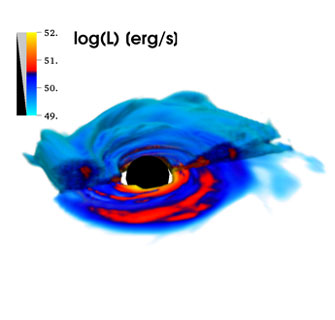 Some black holes and neutron stars can also form binary systems. According to general relativity, these binaries slowly spiral in through the emission of gravitational waves – ripples of spacetime, which carry away energy and angular momentum. This effect, which can eventually lead to the merger of the two objects, has until now only been indirectly observed in the slow evolution of the separation between two pulsars. But
gravitational wave detectors have made the first direct detection of these waves, opening up an entirely new way to observe the universe. More information on the first observation of a binary black hole merger.

In the presence of at least one neutron star, binary mergers can also produce energetic electromagnetic signals: they are likely to be the source of short gamma-ray bursts, and can power infrared emission days after the merger through the radioactive decay of ejected neutron star material. From observations of these mergers, astronomers will learn about general relativity in an entirely new regime, constrain the properties of black holes and neutron stars, and improve our understanding of gamma-ray bursts.

CITA is currently involved in this effort through participation in the LIGO Scientific Collaboration and SXS Collaboration.

A mathematically and computationally accurate model made using Einstein’s GR equations of a decaying binary black hole system.  (The large black hole is spinning, and is three times the mass of the smaller black hole.)

For researchers, the colours denote the following:
(a) Yellow-red-green:  Intrinsic scalar curvature of the apparent horizon.
(b) grey lines: trajectories of the centers of the apparent horizons
(c) The plane is the **instantaneous** orbital plane, so its motion indicates precession.   This plane is shown with two different color codings:
(c1) far away in black-blue-white:  The magnitude of the Weyl-Scalar r*Psi4.
(c2) near the black holes in purple-white:  The lapse function.