Cosmology, loosely defined as the study of the universe as a whole, is among the oldest of human intellectual pursuits. At CITA, researchers tackle questions related to physical cosmology, the rigorous and quantitative application of known physical laws to astronomical observations of the universe on the largest scales. Because of the wide range of scales studied, cosmology not only offers a means to understand how the universe got to be the way it is, but also to test theories of the fundamental laws of physics in conditions that are impossible to replicate in laboratories on Earth.

CITA researchers are involved in all aspects of physical cosmology, from inflation to the epoch of recombination when the cosmic microwave background (CMB) was emitted, to the structure formation of the present-day universe.

A common thread in all of these studies are cosmic expansion and primordial fluctuations. Expansion is an empirical fact of our universe and key to understanding its matter and energy content. Without primordial fluctuations, the universe would be perfectly smooth and featureless, devoid of all planets, stars, and galaxies — a very dull place indeed.

What process generated the cosmic expansion and primordial fluctuations in the first few instants in the universe? Further, how did the primordial fluctuations evolve in the expanding universe, generating CMB anisotropies and finally culminating in the grand “cosmic web” of large-scale structure that we see today? CITA cosmologists are involved in both theoretical and observational aspects of these problems.

Early universe work at CITA is mainly theoretical, focusing on the theory that relates the early phase of nearly exponential expansion known as inflation to high-energy particle physics, and its predictions for the CMB and large scale structure. Specific problems under consideration include primordial non-Gaussianity, multifield inflation, and preheating from parametric resonance.  This work provides the crucial link between astronomical observations and fundamental physics.

As the flood of new CMB data continues to come in from experiments such as the Planck satellite and the Atacama Cosmology Telescope (ACT), the efficient analysis and interpretation of data becomes increasingly important. This involves processing the raw observational maps to remove foreground obscuration and determine statistical measurements of underlying physical quantities such as the “power spectrum” of primary and secondary CMB anisotropies. 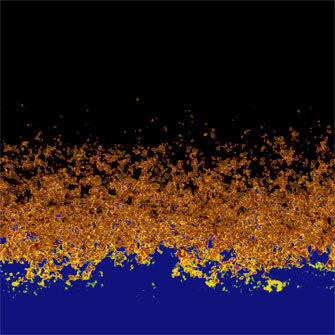 Observations with the Canadian Hydrogen Intensity Mapping Experiment (CHIME) promise to revolutionize our understanding of the mysterious “dark energy” that is causing the expansion of the universe to accelerate, by determining the angular size in the sky of so-called baryonic acoustic oscillations (BAO), using a technique known as hydrogen intensity mapping. After initially proposing the idea some years ago, CITA researchers are now involved in the design of intensity mapping experiments, foreground removal, and power spectrum estimation, in much the same way as in the CMB analysis effort.

Cosmological N-body simulations run on SciNet supercomputers are being used to make precise predictions for application to a wide array of observations, including CHIME and large galaxy surveys such as the Canada France Hawaii Telescope Lensing Survey (CFHTLenS). At the same time, the analytical framework for the nonlinear growth of dark matter fluctuations into the cosmic web, developed at CITA over the last 25 years, is now being applied to observations of secondary CMB anisotropies and the cosmic infrared background with Planck, ACT, and Herschel.