In the 10th century the Persian astronomer Al-Sufi observed and described “a small cloud” we now know was the Andromeda Galaxy.  In 1785, William Herschel mapped the plane of our galaxy, the Milky Way. In the 1920s, astronomers debated whether the Milky Way was the universe and the clouds or nebulae they observed were gaseous HII regions within it  or “island universes” of their own. Edwin Hubble used the new 100-inch telescope on Mt. Wilson  to solve the puzzle. Taking long photographic exposures, he resolved stars in the nebulae and concluded that they were “island universes”.  Examining the spectra of their light, he discovered that they were also moving away from us and that the universe was expanding.

Today, theoretical astrophysicists study galaxies on all scales and from all perspectives:  they use the cosmic microwave background radiation, weak lensing, and galaxy surveys to constrain the initial fluctuations that gave rise to galaxies today; they model  the first generation of galaxies and supermassive black holes in the era of re-ionization; they simulate the dynamical evolution of galaxies over cosmic history as they interact in clusters  and are transformed from spirals into ellipticals in mergers.

The challenge today is how to turn what has been a descriptive science into one that makes testable predictions, by understanding the physics of galaxies. The main tool in galaxy research today is large scale simulations, and the problems revolve around how to model the complicated physics that arise when you have gas in galactic systems.

Gas turns into stars and stars back-react on their environment. This feedback isn’t well understood. The most obvious form of feedback is a supernovae but stars at all stages of their life  push on gas and heat it, and the combination.  In simulations, you can incorporate the physics if you put in some rules and those subscriptions have a huge effect on the number of stars that form in your model galaxies.  How do you turn this into a predictive science? 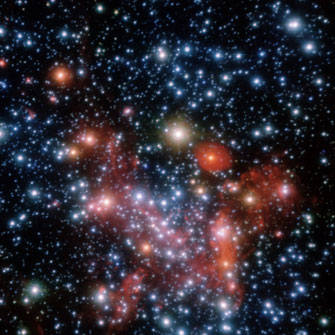 Among the questions  researchers studying galaxies are asking are,
for galaxies of different types, how does gas get into the galaxy?
How does it turn into stars and how does it leave the galaxy?
Does the enormous amount of light that stars produce affect the gas in a substantial way?  If so, how?  Does it heat the gas, or do their solar winds shock the gas?
How does a stellar mass change with time?
How does the metalicity of gas change of over time? How does the amount of gas in the halo change over time?  Scientists check those things observationally, and then they can compare their  simulations and see if they’re really modeling the physics.
How do magnetic fields  effect the efficiency of feedback?
How does a star forming galaxy die?
Why do supermassive black holes always develop at the centre of disk galaxies? What’s the mechanism?  How does a six million solar mass black hole form?

We don’t know yet.

Evolution of a Galaxy

This is a mathematically and computationally accurate simulation of the formation and evolution of a Milky Way-type galaxy over the life-span of the universe.  In the model, young stars are shown as blue,  and old stars are red.