The Galaxy is composed of billions of stars, but where do these stars come from? And what happens to them at the end of their lives? The interstellar medium, or ISM, which is the other major component of the Galaxy is the key to solving this puzzle. It provides the fuel necessary for new generations of stars to form, while the material itself contains the remnants of previous generations of stars. The evolution of the stars and the ISM in our Galaxy are very closely and intricately connected.

The temperatures and densities of the interstellar gas and dust vary from one extreme (e.g., cold dense molecular) to another (e.g., hot diffuse ionized). These various phases of the ISM have unique observational signatures and although the transition timescales are such that we cannot observe the entire cycle of this medium from star death to star birth, the Galaxy has an abundance of material at various stages of evolution, from which to develop a complete picture. This picture can only be confirmed with a deeper understanding of the ISM, including the effect from the phenomena which sculpt it: stellar radiation and winds, supernova explosions, and magnetic fields, amongst others.

The research at CITA strives to more deeply understand the interplay between stars and the ISM. Data from the Herschel Space Telescope are being used to trace the dust population in the Galaxy in a variety of environments, covering the range from the dense Galactic plane (where stars are forming) to the diffuse high Galactic latitudes (where the dust in in-falling clouds appears to be characteristically different). 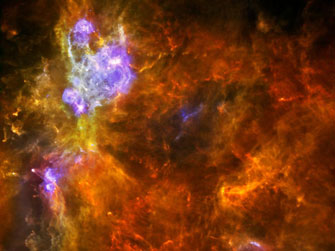 With these data and through simulations, models of the evolution of the ISM can be developed. For example, we know that stars form when dense “cores” within molecular clouds collapse under their own self-gravity, but the details of the collapse have not yet been elucidated.

Complementing the high-resolution Herschel data, all-sky Planck Space Telescope data are also being used to probe the physical properties and abundances of various dust components, as well as the environment in which they exist. With this knowledge, we are able to further the solution of the complex puzzle that is the ISM, while perhaps also discovering further pieces that weren’t even known to exist.