A new part of the time-domain radio sky

By: Liam Connor and Robert Main 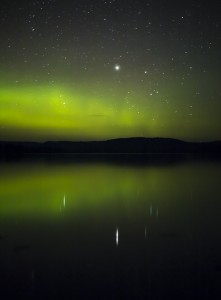 (Image Credit: Andre Recnik; Click to enlarge) The first VLBI image of a pulsar’s scattering screen revealed a linear structure in the sky. This is believed to possibly due to refraction at grazing incidence of current sheets in the ISM, where ripples in the sheets cause an enhanced bending of the light from the pulsar. Analogously, a star’s light along the surface of a lake is reflected to us from many wavecrests, creating a linear streak of images.

The Algonquin Radio Observatory (ARO), built in 1965, along with the Dominion Radio Astrophysical Observatory (DRAO) were the first to achieve very long baseline interferometry (VLBI) whereby two single-dish telescopes were combined to give the same resolution as a telescope the size of Canada. We at CITA, the Dunlap Institute, and the Department of Astronomy and Astrophysics have continued the Canadian VLBI tradition with a new programme to do transnational interferometric observations of pulsars and fast radio bursts (FRBs). The former has been named “scintillometry”, whose purpose is to use VLBI on earth in combination with scattering in the interstellar medium (ISM) to get an effective telescope size of ~astronomical unit with which we can study pulsars and the intervening matter between us and them. The latter could provide the first ever spatial localization of FRBs.

Radio emission from pulsars is scattered by the interstellar medium, resulting in multiple images in the sky, slightly shifted in frequency and delayed in time. These images interfere with each other, causing the observed signal of the pulsar to scintillate – much in the same way that stars twinkle in the sky. The method of the scintillometry is to first resolve the scattered images using ground-based VLBI, then to use the scattered images as an “interstellar interferometer”, observing scales of ~picoarcseconds on the pulsar. This method was only recently first used successfully, measuring a change in position of 10s of km of a pulsar’s emission, and serving as a highly successful proof of concept. Scintillometry provides a new way to measure the masses, and the emission location of pulsars. The aforementioned measurements will be a step towards understanding fundamental, yet still unknown properties of pulsars, including their equation of state, and their emission mechanism.

Another new and exciting phenomenon that will be probed with CHIME and ARO are the recently-discovered FRBs. Like pulsars, these exist in the time domain radio sky and emit brief pulses of dispersed radio waves. Unlike pulsars, they seem only to give off a single burst of energy and either never or rarely repeat. Though FRBs were only discovered in the past decade, there seem to be many thousands going off in the sky each day and instruments like CHIME could see thousands per year, more than any other existing telescope. While we still do not know where these objects are or what their energy source is, a VLBI observation of a burst between CHIME and ARO could localize them to nanoarcseconds, telling us once and for all if they live in external galaxies and if they are at cosmological distances.