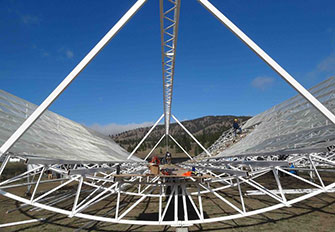 The pathfinder or prototype, proof-of-concept for CHIME is well underway. (This is 2/5th of the completed CHIME).  “One cylinder is essentially finished, the second is coming along, and we’re about to attach the first set of detectors. We’ve got several months of commissioning ahead of us before the whole thing is assembled and up & running, but things are certainly coming along,”…

Applications are now being accepted here for ISIMA 2014: Gravitational Dynamics
The deadline for graduate students is January 17, 2014
Application

This year’s program is on Gravitational Dynamics in the formation, evolution and fate of almost all celestial bodies, from asteroids, to planets and stars, galaxies, and clusters of galaxies. The study of gravitational dynamics has been…

The FIRE collaboration: harnessing computing to observe galaxy formation over the life-span of the universe 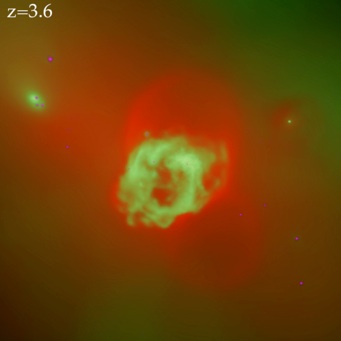 CITA director Norm Murray is a member of the FIRE Collaboration producing simulations to address questions in galaxy formation with unprecedented predictive power.

This video is a realistic simulation of the formation and evolution of a Milky Way-type galaxy over the life-span of the universe, from shortly after the Big Bang up to the present day. The simulation works as an… 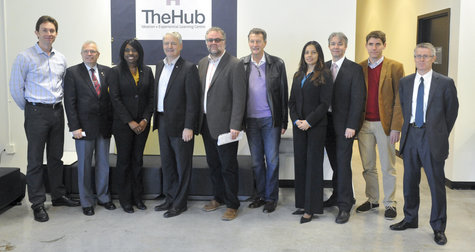 In his welcoming speech at the October 18th inauguration of the new Centre for Planetary Science at the University of Toronto Scarborough, Associate Professor Kristen Menou singled out Professor Charles Dyer to thank, as he had been working toward this day for a decade. But Dyer was not there to hear the remarks—he was teaching a class.

The story of the University of…

Dursi joined CITA as a Post-Doctoral Fellow in 2004 and then was promoted to Senior Research Associate during which time he led the writing of the Computing Networks, and Data white paper for the Canadian Astronomy Long Range Plan,…

Marcelo Alvarez is the recipient of the 2013 Jeffrey L. Bishop Fellowship

Alvarez was awarded the Bishop Fellowship for his outstanding work in cosmology, particularly his recent research on how the universe was re-ionized by energetic small galaxies so efficient they eventually could no longer form. He explained his work this way:

Foucart is the 15th recipient of the Tremaine Fellowship which is awarded annually at the Canadian Institute for Theoretical Astrophysics. He was selected for his outstanding work in numerical simulations in general relativity. In particular Foucart is studying mergers of black holes and neutron stars, and the long-term evolution of accretion disks.

At the time of the award, he had published…

BIG BANG!  THE INTERSECTION OF CREATIVITY & SCIENCECITA Professor Dick Bond shares the stage at the Banff Centre with mathematician Ivar Ekeland and moderator Ian Brown to talk about the creativity at the heart of mathematics and cosmology.

Pen and his team – including CITA post-doc Richard Shaw, U of T summer students Anita Bahmanyar, Natalie Price-Jones and Philip Isaac, Dunlap Institute Professor Keith Vanderlinde, and DAA Professor Marten van Kerwijk on the most recent observing run – is employing the Algonquin Radio Observatory, a 46-metre radio antenna built deep in Algonquin Park beginning in 1959, and a technique the ARO…

Professor Ue-Li Pen has drawn together a team of professors, post-docs and undergraduate students from CITA, the Department of Astronomy and Astrophysics and the Dunlap Institute in collaboration with radio astronomers in India and the Netherlands for a pioneering experiment to use the Interstellar medium to image pulsars with unprecedented accuracy.

Pen and his team – including CITA post-doc…