Planetary system with a star that rotates backwards 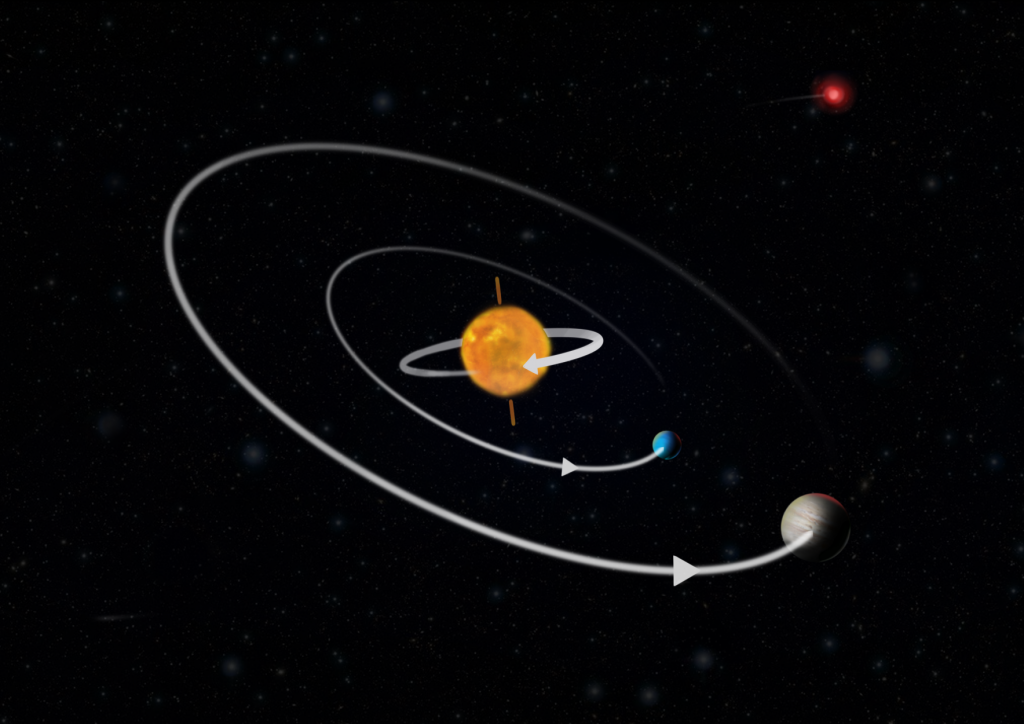 Caption: This artist illustration depicts the exoplanetary system in K2-290. It shows the main star K2-290 A, its two planets, and in the background the smaller companion K2-290 B. The unique feature of the K2-290 system is that the planetary host star (K2-290 A) rotates backwards with respect to the coplanar orbital motion of its two planets. When it was only a few million years old, the disk had a much larger extent than the orbits of the two planets, forming inside. The gravitational torque from K2-290 B led to a precession of the disk’s rotation away from initial alignment with its host star. (Credit: Christoffer Grønne)

Researchers describe a system of multiple planets orbiting a star that rotates backwards. Unlike the Solar System, extrasolar planetary systems sometimes exhibit misalignment between the star’s equator and the orbital plane of the surrounding planets. One proposed cause of such misalignments is a distant companion star exerting gravitational torque on the protoplanetary disk, however no definite examples of such a scenario have been described. Prof. Simon Albrecht (Aarhus University), Dr. J. J. Zanazzi (Canadian Institute for Theoretical Astrophysics), and colleagues describe the stellar rotation and planetary orbits in the star system K2-290, which consists of three stars with two planets orbiting the main star. Based on changes to the star’s emission spectra during planetary transits, the authors determined that the star rotates in the direction opposite the planetary orbits. Specifically, the authors estimated that the star’s rotational axis was tilted by approximately 124° relative to the planets’ orbits. Unlike previously observed systems with stellar-planetary misalignments, K2-290 has a known companion star, and simulations (performed by Dr. Zanazzi) of the protoplanetary disk-binary star system lead to the observed misalignment for a range of parameters. The results support the hypothesis that gravitational torques from companion stars can cause misalignment between protoplanetary disks and their associated stars.