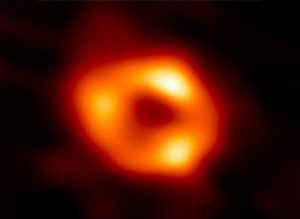 This week, astronomers revealed the first image of the supermassive black hole at the heart of a galaxy not so far, far away — our home galaxy, the Milky Way.

Scientists had previously seen stars orbiting around something invisible, compact, and very massive at the centre of the Milky Way. Known as Sagittarius A* or Sgr A*, this object was strongly believed to be a black hole.

The Event Horizon Telescope (EHT) collaboration is the international research team behind this groundbreaking discovery, involving over 300 scientists from 80 institutions around the globe. The EHT team linked together eight existing radio observatories across the planet to form a single Earth-sized virtual telescope to provide the first direct visual evidence of Sgr A*. The telescope is named after the event horizon, the boundary of the black hole beyond which no light can escape.

He shares his insights on the groundbreaking discovery, the results of which were published May 12, 2022 in a special issue of The Astrophysical Journal Letters and showcased at simultaneous press conferences held around the world.