The Planck Space Telescope was launched in 2009 to map the Cosmic Microwave Background Radiation (CMB)  with the highest accuracy ever. It was equipped with two instruments for High and Low Frequency measurements, the means to cool its detectors to within a few tenths of a degree above absolute zero and to survey the sky in wavelengths from microwave to the very far infrared.  The Planck satellite ran out of liquid helium coolant and was shut down in October 2013 after observing twice as long as it was expected to last.

CITA Professors Dick Bond and Peter Martin, and Douglas Scott of the University of British Columbia co-lead a Canadian science team that played a key role in the Planck collaboration. Bond is both on the faculty at CITA and directs the Cosmology and Gravity Program of the Canadian Institute for Advanced Research (CIFAR). The team included astrophysicists at the University of Toronto, University of Alberta, Université Laval and McGill University.

Twenty-eight scientific papers from the Planck mission were published in March, 2013 in which the Planck collaboration calculated that the universe is 13.82 billion years old;  it is expanding slower than was understood;  it is composed of 4.9 per cent normal matter,  26.8 per cent Dark Matter — the presence of which is inferred through the effects its gravity causes — and 68.3 per cent  Dark Energy — a mysterious force that behaves the opposite way to gravity, pushing and expanding our universe.

Scientists are now working on the next series of papers  about  the  dust and other emissions from our Milky Way to learn about the evolution of structure and star formation in the interstellar medium.

Debut on the BBC and Science Channel! the bicep-planck story 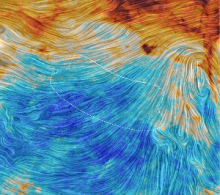 Despite earlier reports of a possible detection, a joint analysis of data from ESA’s Planck satellite and t…