Daniel Tamayo is the recipient of the 2015 Jeffrey L. Bishop Fellowship 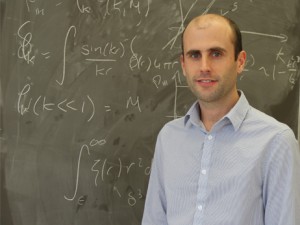 Daniel Tamayo was awarded the Bishop fellowship for his work in orbital dynamics, particularly his recent research elucidating how forming planetary systems evolve to create the diversity of orbital architectures we observe around other stars today.

In the last twenty years, researchers have discovered thousands of planets orbiting other stars. The results are surprising, with about half of these exoplanet systems hosting planets closer to their star than Mercury, and many planets orbiting in extremely elliptical paths. Daniel Tamayo‘s research aims to understand the dynamical processes that sculpt the observed menagerie of planets, which will ultimately help place our own solar system in a broader galactic context.

An important difficulty is that most exoplanet systems are observed after they have undergone billions of years of orbital evolution, and a lot can happen in that time. To tackle these problems, Tamayo worked with Hanno Rein to develop state-of-the-art numerical integrators to accurately simulate such planetary systems.

However, the results depend on the initial orbital configurations adopted for the planets, and it is difficult to know exactly what they should be. One would ideally want to observe young systems to obtain this information directly, but it is extremely challenging to observe young systems, which are shrouded by their dusty birth environment. This may change with the Atacama Large Millimetre/Submillimetre Array, which, by combining light across a 16 km array of telescopes operating at long wavelengths able to penetrate dust, recently obtained an unprecedented image of the young star HL Tauri. The image below reveals a protoplanetary disk with several sharp, concentric gaps. The most exciting interpretation is that these gaps are being carved by forming giant planets. We studied how massive such putative planets could be, and made predictions for how elliptical one would expect the gaps to be. A careful data analysis of the gap shapes later matched our predictions, though the system continues to be an active area of research.

An interesting outcome of this investigation was that, while the system is stable over its current age, it is a ticking time bomb. It is only a matter of time before their chaotic trajectories lead to close approaches between the planets. Some planets will be ejected from the system entirely, while others will remain on highly elliptical paths, like we observe in the older exoplanet sample.

Ultimately, Tamayo wants to place our own solar system in this wider context of the violent dynamical histories we observe across exoplanets. In a study led by Ryan Cloutier, researchers found that indeed, Jupiter may have ejected an extra planet from our own solar system at early times. It will be an exciting task to continue to unpack the rich information provided by the exoplanet population, and to place our own existence in this bigger picture.

His relevant publications on these topics include:

The Jeffrey L. Bishop Fellowship is granted every two years for excellence in research in astrophysical dynamics.

Jeffrey Bishop was one of CITA’s first postdoctoral fellows. He was killed in an automobile accident shortly after leaving the Institute and this award was one of several created by his mother, Mrs. Muriel Simmons, to remember his life and work. Her donation is matched by CITA.