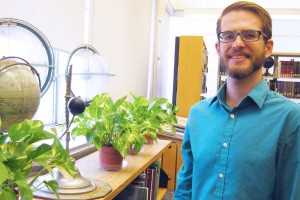 Aaron Zimmerman is the 16th recipient of the Tremaine Fellowship which is awarded annually at the Canadian Institute for Theoretical Astrophysics. He was selected for his outstanding work in analytic studies in general relativity. In particular Aaron studies how black holes respond to perturbations and emit gravitational waves; he has also helped to develop novel methods to visualize curved spacetime and to investigate complex mode-coupling in tidally deformed neutron stars.

By the time that he received the award, he had published a number of papers dealing with perturbations of compact objects such as black holes and neutron stars. Notable papers included:

“Turbulent black holes,” Phys.Rev.Lett. 114 (2015) 081101– This paper investigated a toy model of mode-mode coupling in the perturbed spacetime of a rapidly spinning black hole, building on previous work published by Dr. Zimmerman and a number of collaborators. When a black hole spins rapidly, perturbations cause long-lived oscillations of spacetime near the hole. This study revealed the possibility that these oscillations source complicated, additional modes of oscillation, analogous to how turbulent vortices can combine to form large weather patterns above the surface of the Earth. This mode coupling is an example of the connection between gravity and fluid motions which has been the subject of extensive study in recent years.

“The stability of tidally deformed neutron stars to three- and four-mode coupling,” Astrophys.J. 781 (2014) 23 – This paper dealt with the challenging problem of mode-mode coupling in neutron star binaries. The gravitational field of a companion star tidally deforms a neutron star, and this deformation can in turn excite pressure and horizontal waves in the neutron star, draining energy from the orbit and heating the neutron star. Such tidal effects can potentially impact the last stages of the inspiral of two neutron stars under the effect of graviational radiation. Zimmerman and his colleagues developed new methods to investigate the coupling of two and three simultaneous oscillations to the tidal deformation, showing that the overall impact of tides on the binary is small.

“Visualizing Spacetime Curvature via Frame-Drag Vortexes and Tidal Tendexes III. Quasinormal Pulsations of Schwarzschild and Kerr Black Holes,” Phys.Rev. D86 (2012) 104028 – This paper was the most recent in a series investigating a novel method of visualizing curved spacetimes. The method is in direct analogy with the use of electric and magnetic field lines to visualize the fields which exert forces on charged particles. In this study, Zimmerman and his collaborators applied this method to perturbed black holes in order to more deeply understand how gravitational waves are produced and emitted in these spacetimes. Among the many insights generated by this method was the realization that perturbed black holes can be seen in the near zone as rotating or oscillating quadrupolar sources, emitting gravitational waves into the far zone. This effect is in direct analogy to oscillating electromagnetic dipoles, such as the familiar dipole antenna, which emits radio waves.

Dr. Zimmerman was a post-doctoral fellow at CITA at the time of the award. He is now a Senior Research Fellow at CITA.