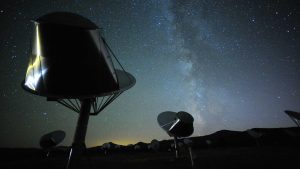 In the quest to identify the origins of one of astronomy’s biggest mysteries – fast radio bursts (FRBs) – Canada’s world-renowned telescope, the Canadian Hydrogen Intensity Mapping Experiment (CHIME), is getting backup.

Supported by approximately $10 million in grants from the Gordon and Betty Moore Foundation, the CHIME/FRB Outriggers project has now secured funding to complete the construction of three new radio telescopes to work in conjunction with the main CHIME instrument, located in British Columbia’s Okanagan Valley.

“It has been a pleasure to work with the talented team developing the outriggers for CHIME,” said Robert Kirshner, Ph.D., Chief Program Officer for Science at the Gordon and Betty Moore Foundation. “Despite the burdens of COVID, interruptions in the supply of steel for the antennas, and competition with bitcoin miners for the specialized computer chips that power their computational wizardry, the CHIME team is headed toward a spectacular improvement in the scientific yield of CHIME’s copious FRB discoveries.”

With the ability to detect 10-100 times more fast radio bursts than all other telescopes combined, CHIME has had a radical impact on FRB science. The telescope has allowed scientists to observe the vanishingly brief bursts with exquisite time resolution. CHIME’s limitation, however, has been its inability to identify with any precision where the FRBs were coming from. The outriggers will enable this radical leap.
“The CHIME telescope can currently locate the position of a fast radio burst to a patch of sky equivalent to the size of the full Moon. With the addition of the three new outrigger telescopes, this patch of sky can be reduced to the size of a quarter held at roughly 40 km,” explained Patrick Boyle, Senior Project Manager for the CHIME/FRB Outriggers project and Senior Academic Associate in the Department of Physics at McGill University.
By pinpointing FRBs, the new telescopes will allow scientists to zoom in on the environments within galaxies from which the bursts originate and, in so doing, narrow down the possible explanations for their existence.
“The CHIME/Outrigger Fast Radio Burst team is poised to shed even more light on one of the Universe’s most exciting recent discoveries: the fleeting pulses known as fast radio bursts (FRBs),” said lead CHIME/FRB researcher Prof. Victoria Kaspi, Director of the McGill Space Institute and Professor of Physics at McGill University. “The CHIME outrigger telescopes will help us to both understand the origins of FRBs and realize their potential as cosmic probes.”

CHIME’s new siblings
The outrigger telescopes are smaller versions of the original set to be built in three locations across North America. One of the outrigger sites is in Canada:
– Near Princeton, British Columbia, where construction of the new telescope’s reflector has already been completed
The other two are in the United States and result from partnerships with existing radio astronomy observatories:
– The Green Bank Observatory in West Virginia, where it sits in the middle of the National Radio Quiet Zone (NRQZ).
– The Hat Creek Radio Observatory in California, where the CHIME/FRB project has partnered with the SETI Institute.

“Green Bank Observatory’s distance from the other CHIME locations, being within the NRQZ and the pre-existing infrastructure available on our campus make this the perfect site for a new CHIME Outrigger. The instrument will benefit from the protections of radio frequency interference that the NRQZ provides. It is good to see our extensive 2,700 acre campus being used in new ways, and it is exciting to see this impressive instrument under construction,” said Andrew Seymour, a Green Bank Observatory scientist working with the CHIME team on the project.

“We are thrilled to welcome the world-class CHIME team to the Hat Creek Radio Observatory,” said Andrew Siemion, Bernard M. Oliver Chair for SETI at the SETI Institute. “Hosting a CHIME outrigger represents a phenomenal and complementary addition to the HCRO’s science mission.”

Building on a successful collaboration
Representing an amazing convergence of scientists across North America, the CHIME/FRB Outriggers project is a collaboration between several Canadian and international institutes, including McGill University, the University of British Columbia, the University of Toronto, West Virginia University, and the Massachusetts Institute of Technology. Also partnering on the project is the Perimeter Institute for Theoretical Physics, the National Research Council of Canada, the National Radio Astronomy Observatory, and the Green Bank Observatory.
The outrigger project has also received funding by the National Science Foundation (NSF) for the electronics as well as salaries for faculty, postdocs and graduate students located in the United States.